Create a hero using eight defining characteristics, like Archer of the Realm or Chainmail or Stealthy.  Assign them dice ranging from d12 to d6. Note your Health and Stamina levels, and then select an adventure 'zine.

Each adventure 'zine packs a lot of adventure for such a little size! Using a clever new exploration mechanic, each foray into the dungeon will offer different challenges using a simple combination of two dungeon elements.  Select two of your own traits and roll off against the two dungeon elements, and see if you can beat the dangerous situation.  If you roll well, you survive to continue deeper.  If you fail, you will take damage. But don't despair – you can spend Stamina to re-roll dice before you apply their effects!

If you can make it through the dungeon, you win! Your score is how many treasures you manage to bring out of the dungeon – see if you can beat your high score by playing again!

Volume One of Dungeon Hero contains three eight-page 'zines that you print out, cut, and fold yourself:

The PDF's come in two formats:

This video shows how to fold the Volume format printings into 'zine booklets:

If you like Dungeon Hero, be sure to check out Fable on your Table, which is a deeper, more detailed version of the system used in Dungeon Hero.

Grabbed this in the Racial Justice bundle, and just played the Frost Giant adventure. This was a lot of fun!! From folding the booklets, to creating a character, to playing the adventure, the whole thing was a blast, for a pleasantly diverting evening away from Netflix. (Alas, I had to use an online dice roller to play; if I get myself a set of gaming dice, then I can play screen free!) Reminiscent of the CYOA books of my youth, with a little more freedom of imagination. Definitely planning to buy the next two volumes (and more, should you write any!) Thanks for this (and for your support of the bundle).   :)

Awesome. Glad you enjoyed it.

And thanks for supporting the bundle!

A very simple yet clever system, which applies to pretty much any genre and makes for very engaging adventures. The possibilities are limitless, and so are the potential tweaks to the game!

Nice work! I haven't checked out the second volume yet. Have you thought of doing split tracks? Like rolling a die to see where you go or allowing players to choose shortcuts that have greater dangers?

Yes, I've thought of that; these adventures are quite linear!  Problem is that entirely split tracks through the adventure would also shorten the adventure, and we're pretty tight on space as it is with just one printed page.

I am exploring some branching mechanics in the later volumes.  For instance, the vampire adventure in Volume Three has a fortune-telling mechanic that can expose new weapons you can use to take down the vampire, but they come at an increased threat cost.  It's not something you choose, but it does have some branching narrative.

One thing I'm thinking for Volume four are one-entry decisions you can make, that are either/or decisions that may have repercussions later for plot point later.

I've also thought briefly about a larger, "folio" size adventure resembling a hex crawl type adventure that has a truly branching narrative with a mini-adventure (a series of traits) on each page with a decision at the bottom of the page to take you to another page (basically, hex to hex). Those sorts of things will be much harder to playtest thoroughly, so they'd be slower to produce, though.

Okay. I dig that. Yeah, I was thinking that the branching narrative would be something like, say 1-22, you're climbing a mountain. But then at 23 you have a lock icon and if you' can beat, let's say a d8 or d10 hidden rock trait with your Elf Eyes or something, you can instead advance to A1. A1 is 4 sections long and has strong monster traits. It spits back out at 32. Otherwise you continue down the main line, taking longer but facing less dangerous adversaries.

These alternate tracks could be in text boxes on the right-side margin.

Oh, and do you have a random treasure generator or anything? Man, I'm loving this system.
EDIT: Oh, I see what you mean about size. Yeah, the pocketmod thing. I was reading them on the regular PDF thinking you could just add more pages.

Well, if you're looking for a more fulsome Dungeon Hero experience, you might check out my Fable on Your Table game. It's got some mechanics that are very similar to Dungeon Hero, but it has printable miniatures, a deeper combat system, and a companion web app that procedurally generates dungeons.  Dungeon Hero was created as a distillation of that game, so if you're looking to go the other way and get something more detailed and expansive, that's a good pick!

Also, I suppose there's nothing preventing a PDF that has more pages.  I just felt that the 'zine size made it nice and portable and kept the play time to nice, enjoyable sessions that never go on too long. But there are people who have expressed interest in making their own Dungeon Hero adventures, so maybe we'll see some new adventures with these kinds of mechanics.  (Or maybe you will write some?)

Hmm, maybe I will write some. I wasn't looking to see Dungeon Hero become something that it's not. I really like it for what it is. Just wanted to riff about storytelling. But I will go and check out Fable on Your Table, too. THanks

Printing Problems! My Core Rules PDF is not orientated like yours. When I print in the 4x2 pattern, pages come out upside down and out of order. I'm familiar with PocketMod prints, but I'm missing something on the print side. Thanks!

There's a video on how to fold the 4x2 'zine format on the page above.

If that doesn't explain the issue, let me know! 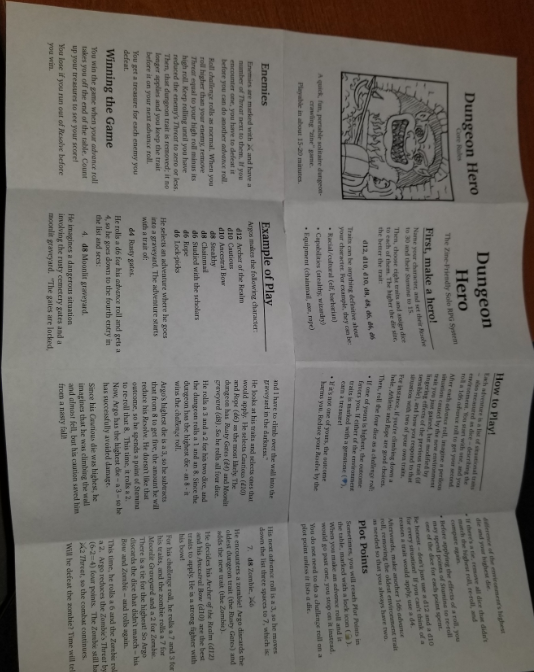 yes found that, its a printing issue. In your vid the text is upside down on each side of thw paper. When i print its all the same direction so folding doesnt work.

Thanks for adding the photo - that makes clear what the issue is.  I will look into it tonight and get back to you!

Hmm.  I just double-checked the file, and it appears to be correct.

Which file are you printing?  If you want the 'zine format, print "Volume One v1.4.pdf".  The "standalone" versions (like "Core Rules v1_5.pdf") are there for the people who just want to read them as PDF's on their tablets.

I've also updated the info pages with notes to this effect so hopefully it will help other people avoid the same trouble you experienced.

Ahh Thank you, that is exactly the issue. I was on the StaneAlone docs. Didn't notice there was a difference. I thought each PDF was a separate adventure. Didn't realize the DungHero Zone was all of it combined. thanks!

Glad we got it sorted!

Here's the first one for Fortress of the Frost Giant Jarl.

And the second one for Castle Charon.

Interesting.
When a line has several enemies, am I correct to assume that I have to defeat them one after the other, gaining one treasure each time I defeat one (and losing overkill, that is each new enemy starts anew)?

Amazing. I was so bored before I found this.

Then my goal for the game is accomplished! Glad you're enjoying it. More is coming.

pure genius. The cut and reverse fold to create the book, brilliant!

I can't take credit for the cut and reverse fold setup, though - that's a staple of the "zines" community.  I picked up the technique looking at other people making 'zines around the web.  (It is pretty cool, though, isn't it?)

Is there a software you used to make these in the one page format?

I used Apple's Pages word processor. I set up the page setup to have the metrics of each individual eighth-of-a-page, then then made an Automator script to convert the PDF that produces into a series of .png files, which I then lay out in another document with pre-set page positions and rotations. I then export that as PDF.

That way, I have two PDF's: one that can be read by a PDF reader and it will flow in the way people expect, and one in a foldable format that will fold correctly. 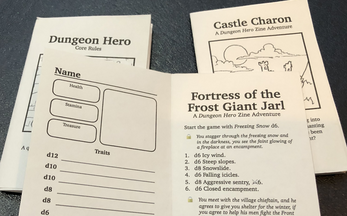